My best guess about the future is eventually we will all be “uploaded into the cloud.” (awkward, but it gets the meaning across)

It’s tempting to say we’ll all be living in a ‘simulation’ at that point. But, I think by that point we will select a new term.

Therefor experience and perception are always a ‘simulation’ of the ‘real world.’

If we live in the cloud, and we experience a world that is generated for us by algorithms, as long as that experience is AT LEAST as accurate as our ‘real-world’ experiences were, then I don’t think it’s fair to call it a simulation anymore.


It’s something more. It is a ‘chosen reality.’ In some sense it will be inferior since the ‘real world’ will always be more complex and nuanced than our generated ones. But the difference will be beyond our ability to perceive it. Our chosen reality will be superior perceptually. It will be the reality we want, not the one forced on us.
Posted by Shane Brinkman-Davis Delamore at 11:28 AM 3 comments:

What-You-See-Is-What-You-Get was always an awkward acronym. Say "wizzywig" and people just look at you strangely. There is an amusing anecdote about the origin of the acronym on Wikipedia. I hope it's true:


The phrase "what you see is what you get," from which the acronym derives, was a catchphrase popularized by Flip Wilson's drag persona Geraldine, first appearing in September 1969, then regularly in the early '70s on The Flip Wilson Show. The phrase was a statement demanding acceptance of Geraldine's entire personality and appearance. wikipedia

The idea, though, is powerful. Being able to see what the output of your work looks like as you edit is a tremendous relief to the mental burden of creation. It was a hot idea in the '80s and '90s, but it is equally important, and often ignored, today in 2016.

The best interfaces are the ones that get out of the way. You know an app is well designed when you completely forget the interface and instead can dedicate 100% of your mental energy towards your creation. These interfaces tend to have two things in common.

As of version 3, Paper by FiftyThree extended its excellent sketching app with note taking features. They introduce a brilliant set of natural gestures for formatting your notes that required zero screen clutter.

By contrast, consider OneNote. It has a bewildering array of features, buttons, icons, widgets and text. My note in the screenshot below has a short title and one line of text. It is oppressively dominated by the rest of the interface. 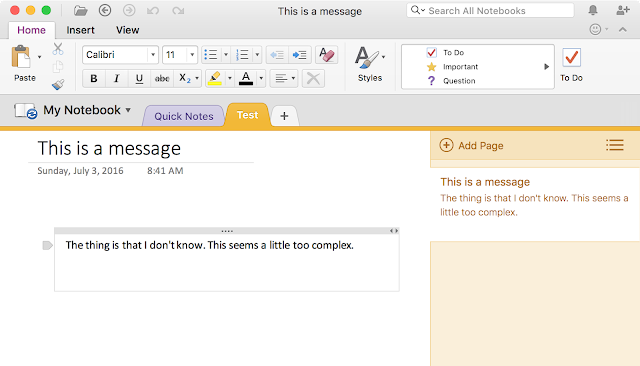